Did HaShem really mean for Kefa (Peter) to eat monkeys, vultures, and venomous cobras when He showed him the vision of Acts 10?  There is a phenomenon in Scripture that evades many who understand that passage as an abrogation of Torah (esp. of Leviticus 11 and Deuteronomy 14) and the Prophets (e.g. Isaiah 66:17). It is a literary device which has precedent apart from that passage (as well as within it).  That phenomenon is the Hebraic convention of describing persons as animals (food animals or non-food animals) or even as edible plant products to illustrate a point, i.e. a special class of metaphor.  Scripture bears examples of both.

It should not really strike us as unthinkable that people could be compared with food or animals, as we do the same thing in English. [1]  We can also find Messiah Yeshua Himself calling certain of the Pharisees “vipers” (Matthew 23:33) and referring to those who are hostile to His Truth as “dogs” and “swine” (Matthew 7:6).  He also uses two clean animals, i.e. goats and sheep, in order to categorize persons in the eschatological framework of the Olivet Discourse (Matthew 25:31-46).  In this judgment oracle, the goats are consigned to everlasting punishment and the sheep to everlasting life (v. 46).

This is not solely a convention of the B’rit Chadashah (apostolic Testament), however.  We find this same phenomenon in the poetic constructions of Yirmeyahu’s report at 24:1-10 of his canonical work (see summary statement in graphic at right).  Figs are generally a food item, but the statement in Yirmeyahu (Jeremiah) 24 attests to the success of the Babylonian strategy to exile only the social, religious, military, and economic “elites” from Judah, in order to deprive them of certain essential skill sets (2 Kings 24:15-16).  All totaled, about 10,000 were removed to exile of a population of approximately ten times that number. [2]

This same type of metaphor appears in Acts 10:9-35.  Those who take this passage as a “blanket permission” (pun intended) to eat pigs, lizards, and rats have to divorce verses 9-15 from the fuller context in order to arrive at that conclusion.  Reading to the end of the pericope, however, brings the reader to Shim’on Kefa (Peter)’s realization of the actual meaning of the vision of the treif (unclean) animals on the sheet.  Verses 17 and 18 tells us that it has yet to be explained:

“Kefa was still puzzling over the meaning of the vision he had seen when the men Cornelius had sent, having inquired for Shim’on’s house. stood at the gate and called out to ask if Shim’on was staying there.” (CJB)

“He [Kefa] said to them, ‘You are well aware that for a man who is a Jew to have close association with someone who belongs to another people, or to come and visit him, is something that just isn’t done.  But God has shown me not to call any person common or unclean’….  Then Kefa addressed them: ‘I now understand that God does not play favorites, but that whoever fears him and does what is right [Torah] is acceptable to him, no matter what people he belongs to.”  (CJB)

Kefa realized and articulated plainly that the vision was not about eating poisonous or otherwise unclean animals at all; it was about Gentile-inclusivity.  “Stop treating as unclean what God has made clean” (v. 15) refers to Gentile converts to the faith, not to creamed possum in coon fat gravy… or any other animal which was not intended for human consumption.  Dr. Friedman notes,

“He did not, according to the text, draw the conclusion that he should stop eating kosher food….  We can be thankful that the book of Acts interprets his vision for us in the continuation of the text.  Acts 10:28 describes Shim’on’s conclusion of the message of the vision….” [3]

Visions, like any other prophetic oracle, must be interpreted according to their genre.  In the exegetical methodology prescribed by Willem VanGemeren, the first and foremost point is this: “Be sensitive to the prophetic imagery.” [4] To interpret a passage divorced from its genre is just as ghastly an error as to sever it from its context. 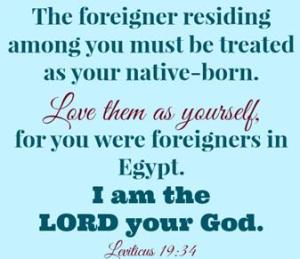 When proper hermeneutical principles and exegetical processes are applied, it cannot be interpreted any other way than that Kefa’s vision was a message advocating equal treatment for Jew and Gentile alike in the Body of Messiah, a message with Torah roots just as deep as they can get, both with regard to one Torah Standard for Jew and Gentile alike (cp. Exodus 12:49; Leviticus 24:22; Numbers 15:16, 29; see also Matthew 5:17-19; 7:21-23; 1 John chapters 2-3) and regarding equality of treatment for both alike (Leviticus 19:33-34; Deuteronomy 10:19; see also Ezekiel 47:22; Galatians 3:28).

Brian Tice is currently a Hebraica research scholar and education facilitator with Manuscript Research Group in Michigan and a Jewish Studies and Ancient Languages professor with MJR Yeshiva. He received his rabbinical semikha in 2000. His formal education includes studies in Music and Modern Languages (Kalamazoo Valley Community College); Bible, Youth Ministry, and Ancient Languages (Cornerstone University); Divinity and Practical Ministry (Grand Rapids Theological Seminary); Higher Education and Classical Hebrew Andragogy (Purdue University Global/Kaplan); and Jewish Studies (Tel Aviv University/Coursera)... culminating in B.Sci. and M.Sci. degrees. Professor Tice has been an avid volunteer with Little Mary's Hospitality House critically-ill children's camp, Habitat for Humanity, Boys & Girls Clubs of Greater Kalamazoo, several schools, and several homeless outreach ministries. In 2001, he was awarded a Governor's Commendation for service to the community and extraordinary academic contributions. END_OF_DOCUMENT_TOKEN_TO_BE_REPLACED
This entry was posted on Sunday, November 16th, 2014 at 7:27 am and tagged with Acts 10, creamed possum with coon fat gravy, Isaiah 66:17, Jeremiah 24, kosher food, Matthew 25:31-46, Peter's Vision, sheep and goats and posted in Biblical Studies, Exegesis, Hermeneutics. You can follow any responses to this entry through the RSS 2.0 feed.
« On the Use of Secular References in Scripture
Holiday Special Price Package »