The two leading theories for the dating of Moshe’s life are based on differing understandings as to the date of the Exodus.  The “early date” of 1446/7 BCE is based on 1 Kings 6:1 and the math it presents, while the “late date” of 1270 BCE is built on the mention of a city called Ramses (a 13th Century BCE Pharaoh).  As I personally lean more to the early date, I will flesh out for my readers the dynamics of the pharaonic relationships surrounding Moshe in an 18th Dynasty context.

If the early date is correct, the Pharaoh at the time of Moshe’s birth is 18th Dynasty Pharaoh Thutmose I, pictured at right, who reigned 1526 (the year of Moshe’s birth) to 1513 BCE. This is going to sound like the script from a soap opera, but the royal Egyptian histories, combined with the archaeological finds of the last 110 years, validate this pharaonic genealogy.  Thutmose I was a general of no blood relation to the previous pharaoh who had served under his predecessor Amenhotep I, who had no male children (heirs to the throne).  Thutmose I had two known children: a daughter with his primary wife Ahmose (the daughter of the previous pharaoh Amenhotep I) and a son, Thutmose II, born of a harem-wife Mutnofret.

The daughter’s name — Hatshepsut — was unknown until very recently, when her tomb was discovered by archaeologist Howard Carter in 1906.  By early dating, she would be the daughter mentioned in Shemot (Exodus) 2:5, who found Moshe’s “ark” when she went to the Nile to bathe, and who appointed Moshe’s birth-mother as his nurse-maid.  Hatshepsut, depicted at left, is a fascinating figure in Egyptian history.  As the child of Thutmose I with his primary wife, she was groomed to be his successor to the throne, even though she was a female in a male-dominant culture.  She likely would have been the next “pharaoh” (the feminine form would actually be “terra” in Middle Egyptian) were it not for the jealousy of her half-brother Thutmose II.  His only path to the throne was to take Hatshepsut as his primary wife, which would reduce her from heir-apparent (queen-regnant) to a queen-consort.  This is, in fact, what occurred, and she bore Thutmose II a daughter named Neferure.  Thutmose II was very ill most of his life, however, and so his reign was short-lived.  He died in 1504 BCE, leaving his 29-year-old widow Hatshepsut to co-rule the Egyptian kingdom alongside her step-son Thutmose III, the son born to Thutmose II by his harem-wife Iset.  They would serve a co-pharaohs the next 22 years, until her death in 1483 BCE.  It was recently discovered by Egyptian minister of antiquities Zahi Hawas that Hatshepsut’s death was most likely not natural, given the evidence of blunt trauma to her skull at the moment of her death, and it is surmised that at the other end of the instrument was the hand of her step-son Thutmose III, a ruthless tyrant whose desire to reign alone was well-known.

Hatshepsut’s name was, at some point, perhaps even during the solitary-reign of Thumose III (shown at right) obliterated from all Egyptian records and erased from the kingdom’s history, never to be recovered until nearly 3400 years later.  Thutmose III would have been the step-brother of Moshe, Hatshepsut’s adopted son.  The fact that he most likely murdered Moshe’s Egyptian surrogate-mother might have been a cause of tension between the two.  Thutmose III ruled the Egyptian kingdom another 33 years after Hatshepsut’s death, finally passing the throne on to his son Amenhotep II in 1450 BCE… just 3 or 4 years before the Exodus (by early date reckoning). 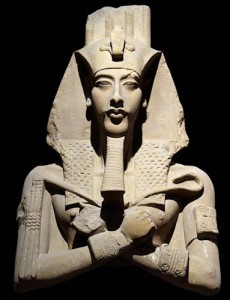 If Amenhotep II, shown at left, is the Pharaoh of the Exodus, which by this reckoning he would be… is it any wonder that Moshe would  be reluctant to address the son of the man who had more motive than anyone, not to mention the means and ample opportunity, to have acted as the assassin of his adoptive mother Hatshepsut?  Even at 80 years of age, Moshe (proclaimed in Hebrews to be a skilled speaker) did not wish to associate with the pharaoh.  When Israel was under persecution in Egypt, Moshe disavowed his identity as “the son of Pharaoh’s daughter,” preferring to receive the same treatment as his Hebrew brethren (Hebrews 11:24-26).

Amenhotep II was known as a charioteer.  An ancient relief (right) exists depicting him in a royal

horse-drawn chariot of the style likely to have been in view in the events of Shemot 14 and 15.  The sticky wicket with this timeline is that Amenhotep II, according to Egyptian chronology, seems to reign from 1450 BCE to 1424 BCE… which would have him surviving the Reed Sea Crossing.  Dr. William Shea, Ph.D., argues convincingly that there is a strong likelihood that two successive pharaohs are actually conflated into one figure in the Egyptian historiography.  He suggested in a 2008 article that Amenhotep IIA perished in the Reed Sea, and that his successor, dubbed Amenhotep IIB, harbored a strong animosity against the Hebrews due to the demise of his predecessor.  This is recorded in an inscription attributable to Amenhotep IIB, based on dating, in which a searing hatred of the Hebrews is evident even in their absence from the kingdom.  A reference warning against “magicians” could target Moshe, whose performance of miracles put the magicians of Egypt to shame (Shemot 7).  See also Bryant G. Wood’s 2009 article.

He has to be a son of Amenhotep IIA.  Also, the Dream Stele (left) written by Amenhotep II’s son Thutmose IV expresses that he dreamed he would be pharaoh, a position he never expected to have.  Why would he, son of a pharaoh, not expect to succeed him?  This would be expected if he was not the first son.  If Amenhotep IIA had another son before Thutmose IV, or perhaps even more than one son ahead of him in line for the throne, something would have to happen to every son before him that would remove them from the heir-apparent position before they could take the throne… such as the death of all the firstborn sons of Egypt including Pharaoh’s (Shemot 12:29).  This would have claimed not only the firstborn son of Amenhotep IIA, but also of his second son Amenhotep IIB, leaving no heir for the second Amenhotep II except his younger brother, unlikely candidate Thutmose IV.

Brian Tice is currently a Hebraica research scholar and education facilitator with Manuscript Research Group in Michigan and a Jewish Studies and Ancient Languages professor with MJR Yeshiva. He received his rabbinical semikha in 2000. His formal education includes studies in Music and Modern Languages (Kalamazoo Valley Community College); Bible, Youth Ministry, and Ancient Languages (Cornerstone University); Divinity and Practical Ministry (Grand Rapids Theological Seminary); Higher Education and Classical Hebrew Andragogy (Purdue University Global/Kaplan); and Jewish Studies (Tel Aviv University/Coursera)... culminating in B.Sci. and M.Sci. degrees. Professor Tice has been an avid volunteer with Little Mary's Hospitality House critically-ill children's camp, Habitat for Humanity, Boys & Girls Clubs of Greater Kalamazoo, several schools, and several homeless outreach ministries. In 2001, he was awarded a Governor's Commendation for service to the community and extraordinary academic contributions. END_OF_DOCUMENT_TOKEN_TO_BE_REPLACED
This entry was posted on Saturday, January 10th, 2015 at 4:23 am and tagged with Amenhotep II, Exodus 1-15, Hatshepsut, Pharaoh of the Exodus, Thutmose I and posted in Biblical Studies, Exegesis. You can follow any responses to this entry through the RSS 2.0 feed.
« Holiday Special Price Package
מֵימְרָא/דָּבַר vs. λόγος »