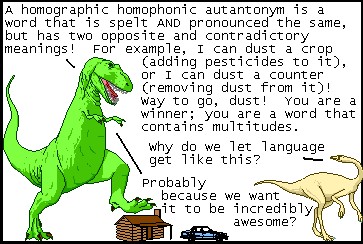 There is a phenomenon that occurs in almost every language, but especially frequently in Hebrew. It is a form of split polysemy whereby a single word or root can be used to connote two concepts which are opposite one another in meaning. An English example is “cleave,” which can mean to split apart (e.g. “a cloven hoof”) or to cling together (e.g. “leave the parents and cleave to the spouse”). Another is “refrain,” which can be used to indicate both “abstain from an activity” or “repeat multiple times” (e.g. in music). Other English examples are listed at https://www.grammarly.com/blog/10-verbs-contronyms/. Several names have been assigned to this linguistic peculiarity, including enantiosemy, enantiodromy (enantiodrome being the referent for an exemplar thereof), antagonymy (antagonym), contronymy (contronym), and auto-antonymy (auto-antonym)… or in Hebrew, סתירה עצמית.

The following list of examples in Hebrew is certainly not exhaustive, but does demonstrate that the phenomenon is anything but rare in the holy tongue. In each of the pairings below, the commoner meaning is listed first with the rarer afterward.

This phenomenon is an excellent example of why context is so important, and why translation methods wherein every instance of a Hebrew root is translated exactly the same are problematic. Words in isolation have semantic domains, i.e. ranges of meaning; but in actual usage, the context (surrounding words, sentences, paragraphs, themes, etc.) dictate which possible meanings are viable and which are not applicable in a particular instance.

In addition, there is also the Semitic phenomenon at play whereby Hebrew words convey both a “positive charge” and a “negative charge” simultaneously. Boman observes that in Hebrew, there is no stasis. In every word conveying a person or thing at rest, the motion from which it is resting is implied (p. 31). For example:

Likewise, filling one vessel implies drawing from (or emptying, to some extent) another. I welcome readers to supply any more exemplars which you have observed, of either type, in the comments.

Brian Tice is currently a Hebraica research scholar and education facilitator with Manuscript Research Group in Michigan and a Jewish Studies and Ancient Languages professor with MJR Yeshiva. He received his rabbinical semikha in 2000. His formal education includes studies in Music and Modern Languages (Kalamazoo Valley Community College); Bible, Youth Ministry, and Ancient Languages (Cornerstone University); Divinity and Practical Ministry (Grand Rapids Theological Seminary); Higher Education and Classical Hebrew Andragogy (Purdue University Global/Kaplan); and Jewish Studies (Tel Aviv University/Coursera)... culminating in B.Sci. and M.Sci. degrees. Professor Tice has been an avid volunteer with Little Mary's Hospitality House critically-ill children's camp, Habitat for Humanity, Boys & Girls Clubs of Greater Kalamazoo, several schools, and several homeless outreach ministries. In 2001, he was awarded a Governor's Commendation for service to the community and extraordinary academic contributions. END_OF_DOCUMENT_TOKEN_TO_BE_REPLACED
This entry was posted on Thursday, June 15th, 2017 at 4:14 am and tagged with antagonyms, auto-antaonyms, contronyms, enantiodromes, enantiosemy, סתירה עצמית and posted in Exegesis, Hebrew Grammar. You can follow any responses to this entry through the RSS 2.0 feed.
« Just Published!
Judaism: Why We Read Torah on Mondays and Thursdays »